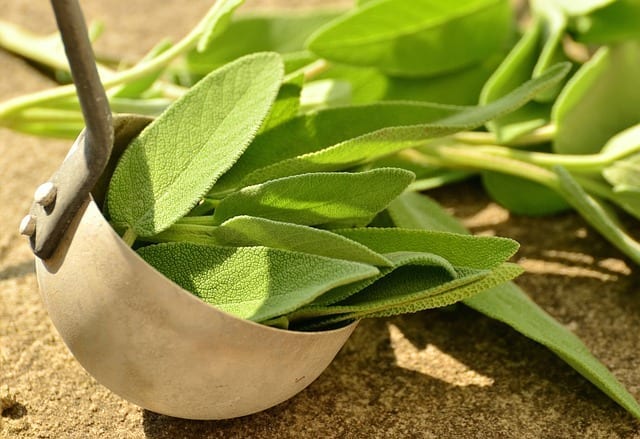 “A leaf of Sage a day will keep the Alzheimer’s away” could be the modern motto for our beloved common Sage, or Salvia officinalis. Common Sage and Red Sage, aka Dan Shen or S. miltiorrhiza, both improve thought patterns and have long been associated with the kind of calm, Sage wisdom we’ve sought in our Elders.

Sage is a wise herb to grow and consume daily, if you’d like to keep a generally cool head and wise attitude about life. It’s mildly drying and warming, with an affinity for the nervous system and respiratory tract. Western herbalists tend to favor Common Sage, making use of the leaves and tops primarily, while Traditional Chinese Herbalists favor the root of Red Sage or Dan Shen. While their uses are somewhat divergent, there’s a surprising overlap in the actions and energetics of these two Sages.

Traditional Western Herbalists have long relied on Common Sage leaves and tops to prevent or ease dry respiratory complaints and strengthen weak digestion, often those associated with the common cold or flu or with old age. It was also commonly used for women’s fertility and hormonal complaints, such as for cooling hot flashes in middle age and reducing milk flow in young mothers.

Matthew Wood describes Common Sage as oily, astringent, and slightly warming, making it good for three primary tissue states: Relaxation, Depression, and Atrophy. When you apply that idea to Common Sage as a respiratory system herb, it makes a lot of sense that it would be useful for colds, flus, and similar conditions. In this case, it’s the astringent and warming aspects of Common Sage that work foremost to dry and re-balance the respiratory system. In the digestive system, Sage’s oily and warming tastes help to lubricate the digestive tract and keep energy flowing while it’s astringent aspect helps prevent the system from becoming too lax.

As a fertility herb, Sage helps the body find needed balance. Traditional Western Herbalists often reach for Common Sage to support women who heading into menopause suffering from hot flashes and night sweats, bleeding gums, and erratic or heavy periods. Common Sage helps tone the reproductive system, smoothing the transition from fertility of the body to fertility of the mind. Women (and men) who are of a particularly phlegmatic temperament, especially those leaning toward the melancholic, can find particular relief from the warming, drying aspects of Common Sage.

For women and men alike, a daily dose of Common Sage either added to food or as a hot infusion helps to balance the mind and ease the emotions. In older texts, herbalists like Culpepper referred to using Sage to prevent forgetfulness in old age. In all likelihood, they were drawing on Sage’s astringent and warming properties to balance and boost circulation in the aging body, thus easing the emotional transition into one’s elder years and improving blood flow to the brain. Modern research has confirmed that Sage can be helpful in preventing Alzheimer’s and Dementia.

Herbalists who practice TCM recognize Sage as Red Sage or Dan Shen. More specifically they’re thinking of the long, red taproot of S. miltiorrhiza. Dan Shen is a cold, bitter herb often used in blood moving formulas. Often, such formulas are used for women in mid-life to their early elder years for complaints including flooding, erratic periods or lack of periods, painful period and cramping. These complaints are often accompanied by insomnia, irritability and moodiness or mood swings, weight gain, hot flashes and night sweats…the signs we’ve come to recognize as perimenopause or the first stages of The Change.

Chinese Medicine practitioners recognize most perimenopausal symptoms as imbalances in the body-mind-spirit as one transitions from the energy patterns of youth and fertility into those of the elder years. During this time of life, the fire or yang that moves blood and energy in the body wanes. Disharmony can arise that unsettles the mind, creating insomnia and seemingly endless thought loops or patterns of worried thinking. Anxiety and Depression can also arise from this change as can chronic fatigue, insomnia, disturbed sleep and vivid dreaming. Dan Shen is often a key to helping ease the pattern by smoothing and regulating the Heart Meridian, which is associated with both the Mind and the circulatory system.

Although traditional Ayurvedic practice doesn’t include Sage in its pharmcopia, Ayurvedic practitioners and physicians are well-acquainted with its potent medicine. From an Ayurvedic perspective, Common Sage is recognized as particularly powerful for conditions of excessive Kapha and somewhat helpful for balancing excess Pitta. Pungent, bitter, slightly astringent and warming, Common Sage leaves and tops are used primarily as a first-aid for colds, flus, and similar respiratory or digestive complaints. Ayurvedic Practitioners warn against using Common Sage for High Vata or excessively dry conditions. Common Sage’s drying, astringent, Vata increasing properties will likely exacerbate those who already have excessive or deranged Vata.

Hot or Cold, does it matter with Sage?

Like herbalists of other traditions, Ayurvedic Practitioners recognize that the energetics of Common Sage change based on how it is prepared. Hot tea is particularly helpful for opening the pores or channels in a diaphoretic or expectorant action that drives dampness and illness from deep within to the surface and out of the body. This is especially useful for conditions of deranged Kapha including damp coughs, phlegm and mucus production, and diarrhea. As a cold infusion, Common Sage is more suited to drying and managing the body’s waterways with its diuretic and astringent action. Cold, Common Sage infusion is helpful for driving out urinary tract infections and reducing bloating and edema while supporting health and balanced circulation throughout the body.

Sage can be used alone, but it’s fairly pungent and may be hard to swallow for most folks. Often, it’s more easily taken in formula with other herbs that both balance or enhance Sage’s action and flavor. To balance Common Sage’s strong Vata increasing action, consider including a mildly dampening herb in your formula, such as Cardamon, or try infusing Sage in milk or mixing powdered Sage with a little ghee. Formulas designed for fertility or hormonal complaints or with TCM in mind might consider using Licorice Root to harmonize the formula and balance Sage’s or Dan Shen’s energy. Traditional Western Herbalists and those formulating with Common Sage might consider adding a little Marshmallow leaf or Violet to balance the drying qualities and ease the body into the new pattern Sage wants to set. 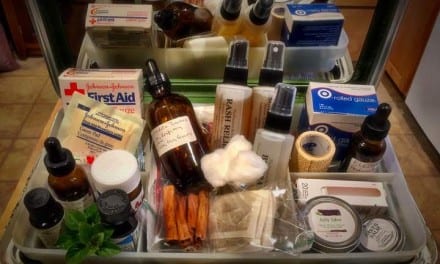 35 Must Haves for Your Herbal First Aid Kit 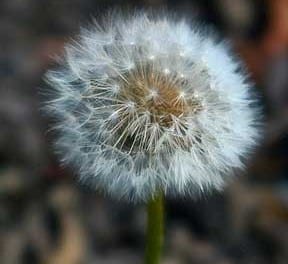 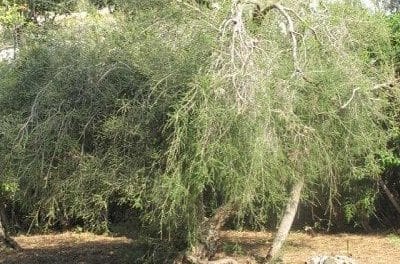