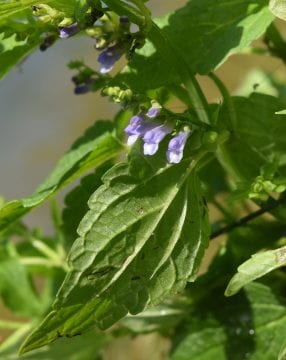 In North America, when you hear an herbalist speaking about Skullcap, the likelihood is that S. lateriflora is the subject. Scuterllaria lateriflora, or Skullcap, is the most commonly used Skullcap in plant medicine-making and herbal remedies in the USA and by modern herbalists who draw on Traditional Western Herbalism or traditions rooted in North America. Other varieties of Scutellaria grow in the Americas and Europe, but most of those have not been widely studied or documented, and often modern herbalists in my neck of the woods are so focused on S. lateriflora as The Skullcap that they completely ignore the other natives to our continent as well as the dominate Asian species, including S. baicalensis. That S. lateriflora is much easier to get a hold of here reinforces the assumption that it is the only Skullcap.

How to Use Skullcap

Scutellaria lateriflora, or Skullcap, is used primarily as a nervine to help settle the nervous system. We use the tops either dried or fresh in tea, tincture, and glycerine generally in formulation with other herbs. Skullcap can stand up to decoction, but a simple hot or cold infusion will do just as well. The key to success is in recognizing the types of conditions under which Skullcap really shines.

North American herbal traditions, including those that were here long before Europeans arrived, have long focused on Skullcap as a calming agent for nervous conditions. The term nervine was connected early-on to this Skullcap, and it’s stuck with good reason. Skullcap’s energy is calming and quieting, with an affinity for those who are often described as overly-sensitive, anxious, or of a nervous disposition. Skullcap can also be described as anti-spasmodic and sedative, although the term nervine more accurately describes its action.

Skullcap works broadly on the nervous system, helping soothe overly fired-up neurons and pathways of both the brain and gut brain. It is described as cooling and bitter and is used for excited, constricted, and atrophied tissues.

Early colonists in the Americas used Skullcap for rabies, or mad dog disease, earning it the name Mad Dog Skullcap. Skullcap alone would not have cured the disease, but it most certainly would have helped settle the mind of its victim and aided in reducing the twitchy, overly-excited nature of the victim’s body.

Today, we may add Skullcap to flu and cold formulas to help settle the mind, particularly when a fever with racing mind or inability to sleep is part of the symptom picture. Skullcap’s ability to pour water on an over-excited nervous system, soothing it and slowing nerve impulses a little, helps ease a variety of nervous complaints, including anxiety and anxiety-related depression, racing mind, insomnia, overthinking, hyperactivity or ADHD-like energy.

From a Traditional Western Medicine constitutional perspective, Skullcap soothes excess choleric energy while balancing phlegmatic energy with an affinity for the Sanguine-Melancholic access. Skullcap’s just-right customers are likely to have a physicality or energy that resembles either Sanguine or Melancholic dominance, so an easily charged and fast nervous system that can go out-of-balance fairly easily and doesn’t have a large buffer for excess energy. Skullcap draws on choleric and phlegmatic energies to soothe the system, aiming to bring it back into balance. Often, Skullcap type people are described as heady, intellectual, or nervous and are prone to over-stimulation and may use overwork or overthinking as a distraction from the problems they cannot solve or control.

Although you are not likely to find North American Skullcap listed among traditional Ayurvedic herbs, Skullcap can be a helpful plant medicine for Ayurveda practitioners. Skullcap’s energy is all about calming Pitta, the fire that drives our nervous system. It reduces excess Kapha while remaining Vata neutral. By reducing the excess Kapha, Skullcap helps reduce the need for Pitta to fire so strongly, as if Pitta was trying to push through all that excess Kapha or as if Pitta was being fueled by an excess of Kapha.

Ayurvedic practitioners who use Skullcap in their practice are often looking to settle excessive emotional states related to fire, such as anger, irritation, jeaousy or envy, hatred and rage. They are likely to combine Skullcap with anti-pitta or nervine herbs, like Gotu Kola, or system-strengthening herbs like Ashwagandha. Herbs that help regulate the liver’s fire may also be helpful in Ayurvedic formulas where Skullcap is used, such as Dandelion, Gentian, or other bitter herbs that support Pitta.

Traditional Chinese Medicine and Skullcap
North American Skullcap is rarely used in TCM practice. Chinese Skullcap, or Huang Qin or S. baicalensis, is the preferred Skullcap in TCM practice. If you’re working with TCM using Western herbs, skullcap may be helpful in formulas that settle the shen. North American Skullcap’s energy is bitter and cold. It is mildly dropping, helping energy to settle in the middle to lower abdomen, and it is mildly draining, moving the excessive energy out of the system.

According to some TCM practitioners, North American Skullcap works on the Stomach and Small Intestine channels, where the stuff we encountered during the day is digested and sorted into that which is useful and that which is not. Here, Skullcap helps give energy to the process, keeping it moving so one doesn’t get stuck on the processing.

My own experience is that it helps to settle the Shen, offering support to the Heart and Liver channels, offering support when those channels are overloaded. For that purpose, I like to pair Skullcap with Motherwort, a bitter and Liver-supporting herb, when racing mind is related to stress or hormonal-transition as in adolescence or PMS.

I once had an abundance of strawberries. After we'd canned,... 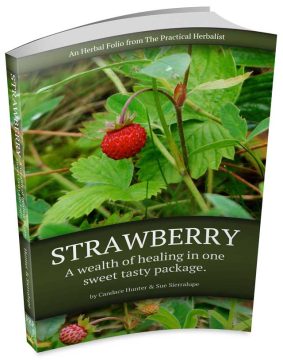 If you’ve tapped into essential oils as a healing modality... 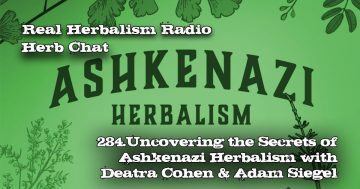