Elder Kills the Zombie Virus in Some 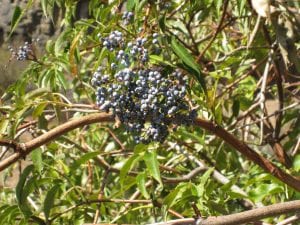 Like I imagine many of you, I thought, assumed even, the scientists who’d accidentally created Virus Z would somehow figure out how to cure it. Two years after the first breakout, I heard a rumor that the military had developed a new strategy, a camouflage of sorts, to help combat the virus. It was mid-winter when the tale reached our camp, but we all felt spring just around the corner. The news gave us the first buds of hope. Weeks later, the second generation zombies took down more than half of us. Science had not only failed, it had made our situation infinitely worse.

I don’t necessarily mistrust science now, but I sure do question a lot more than I did before. It wasn’t just the second gen mutation that got me thinking. Sure, that destroyed my faith, but in the space faith’s wall had once stood, I found a door I hadn’t expected. Watching herbs medical science had scoffed at easing the diseases of my fellow survivors opened that door. Elder was the first key.

Paul, Harvey and I had escaped camp after the second gen breakout by the skin of our teeth. We traveled on foot to one of our summer camps in the valley without food, foraging along the way. Elderberries and wild mushrooms made up the majority of our diet, the human diet, that is. Harvey hunted for himself. At each elder tree, we gathered as many berries as we could, carrying them in a sack and eating them as we hiked. By the time we reached camp, Paul swore he’d never even look at another elderberry. We had the tools to hunt at camp, so they weren’t a necessity, but I kept on gathering them.

About a week or so after we arrived, Paul found a mother and her daughter a couple of miles from our camp lost in the woods. I knew them from our summer trading travels to the city. The little one had struggled with colds and flus the previous year, and I’d suggested she drink copious amounts of nettle, oat, elderberry tea through the winter. In their haste to escape the wave of second gens, they’d left the tea behind, but luckily the mother recognized elder and had sustained herself and the girl on elderberries in their flight. When we found them, they were in bad shape. The mother was dehydrated and exhausted. The girl was half unconscious, dehydrated and feverish with deep, sunken eyes ringed with dark circles. It wasn’t until after Paul had brought them to camp to see me that we discovered the bite.

Linda, the mother, tried to tell me the girl had been bitten by a dog, but I’d seen enough zombie bites on the dead and undead to know the difference. The bite pattern is distinctively human, with a smaller arc of puncture wounds than most canine bites, and generally develops a hideous red and white swelling about the edges where the infection first begins to grip the body. The girl was infected; I had no doubts…and I was enraged her mother would put all our lives at such risk.

As the girl lay on my cot half unconscious and moaning eerily like a first gen zombie, I reached for my mower blade machete. Linda tried to stop me. We fought, her weaponless, throwing herself at me trying to block me from reaching her girl, me screaming and brandishing my blade but unwilling to strike her down to get to the child. Paul was there, shouting, holding me back. Still, I didn’t back down. It was Harvey’s voice that got through to me. He’d crept past us, sat at the girl’s side, and begun barking furiously, but it wasn’t his danger alert bark. That’s what stayed me, his voice was different, a higher pitch like the barking of play with no growling.

When my instincts died down, I stopped struggling, and we’d all stopped shouting, we heard the girl quietly calling for her mother. She was clearly still alive, still human and coherent. Harvey had somehow realized she hadn’t turned, at least not yet.

We watched that girl day and night for three weeks, feeding her as much elderberry tea as she’d take, before the virus broke. To this day, Gwen has a crescent scar on her right forearm where a zombie had bitten her, but she lives thanks to elderberry and her very determined mother.

I can’t say I’ve seen Elder cure virus Z in anyone else. Usually the virus takes hold in minutes. I have seen Elderberry and Elder flowers help drive flu and other viruses from the body, though. Gwen was young, not quite four years-old when she was infected. Maybe the virus somehow couldn’t get a foothold because of her age. I believe the elderberry tea she’d been drinking daily for weeks before she was bit along with the berries and forced fast right after the bite drove Virus Z from her body. Paul, Harvey, and I have drunk a cup a day of elderberry tea since Gwen showed up in our camp, just in case. I hope you never sustain a zombie bite, but it surely wouldn’t hurt to add elderberry to your diet, too, just in case.

Modern herbalists of all sorts are often well aware of... 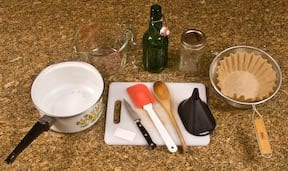 Herbal glycerites are a sweet tasting way to extract herbal...