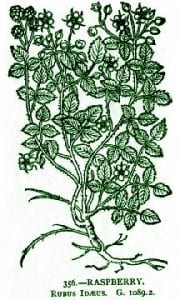 Wild raspberry caught the eye of early cave dwellers, as evidenced by the remains of raspberry canes found at a variety of dig sites across Europe, Asia, and Northern America, and raspberries have been a part of our diet ever since.
In Hellenistic Troy, Raspberry was linked inextricably to fertility and young children in the story of Ida, nursemaid to the infant Zeus, who pricked her finger while picking the snow-white berries thus staining them red for all eternity. Another similar story holds that Raspberry got her name when the Olympian Gods were searching for berries on Mount Ida. Raspberry’s Latin name, Rubus idaeus, means “bramble bush of Ida.”

By the European middle ages, raspberry was recognized as a favorite women’s tonic, being used to soothe many of the complaints of the fertile years. Wealthy medieval Europeans used raspberry for food and as a pigment as well. In early Christian artwork, raspberries were used to symbolize kindness. Raspberry’s red juice invoked the energy of the blood, which runs from the heart and carries love, nutrition, and kindness through the body. In Germany, raspberry was used to tame bewitched horses by tying a bit of the cane to the horse’s body.

Native peoples of the Americas recognized raspberry’s powerful medicinal and protective properties. In the Philippines, raspberry canes were hung outside homes to protect those who dwelt within from any souls who may inadvertently wander in. Various first nation tribes of Northern America used raspberry to soothe labor pains, ease contractions, and ease nausea.

Raspberry magic is the magic of patience in fertility. First year canes do not produce fruit but are essential to the fertility of the plant, establishing her root system and filling her canes with the strength and energy she’ll need. After the cane has weathered a year, she’s ready to bloom and fruit. Raspberry reminds us that maturity and proper conditioning are essential to abundant and healthy reproduction. It is best to be patient, Raspberry councils, when beginning any creative endeavor.

Raspberry’s thorny canes remind us, too, to be protective of the fruits of our labors. If we truly want to share our work, we would be wise to be picky about who will carry it into the world. Birds, who cover a wide territory and have adapted strong beaks and feet undaunted by Raspberry’s thorns, are welcomed by thorny Raspberry’s canes. Bear, with his delicate claws, thick coat, and wide range is another welcome forager in Raspberry’s thicket. Raspberry offers up her bounty knowing her seed will be carried far and wide by friends who have evolved the tools and techniques to pass her thorny test.

If Raspberry has come into your life around a specific project, you would be wise to consider carefully with whom you share the fruits of your labors. Is the person in question one who must be won-over, or is he or she already adapted to your way of thinking? Will the person in question carry word of your work to a wider or a new audience?

Raspberry, like her cousin Rose, offers all of us an opportunity to remember to be gentle with one another, to be loving and patient as we work our own magic in the world. It is only with care and a gentle touch that Raspberry yields her fruits. Even the magic of her leaf requires careful, patient treatment; you must wait for the leaf to dry fully before attempting to use it as medicine or food because if you don’t you’re likely to end up with an upset stomach. Raspberry invites us to slow down and savor all that must occur before we bear the fruits of our lives.

In Astrology, Raspberry is considered a feminine plant and is governed by Venus. Raspberry’s element is water.

To learn more about dandelion, read The Practical Herbalist’s Herbal Encyclopedia entry on this herb. 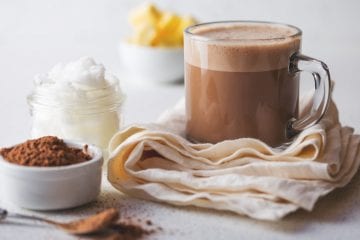 Cacao is one of the most Divine treats I give... 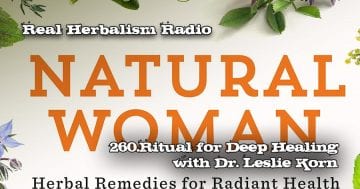 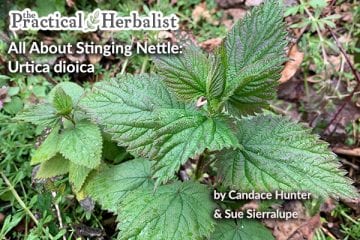 Most people know nettle by its lasting sting. One accidental...

You can use Minty Strawberry Leaf Mouthwash as a breath...